Robert Mosley was born in 1864 at Derbyshire in England. He left school at an early age, due to the death of his father and he commenced work at the Guidebridge Spinning Mills.

Robert Mosley arrived in New Zealand during 1884 to become the manager of a Locomotive Shed at Balclutha. Three years late he moved to Melbourne with his wife Mary Ann.

A native of Ashton Under Lyne, whom had previously been married to a Mr Travis. In Melbourne an Aerated Water Factory had been established at 13 Boundary Road in Flemington Bridge, near Melbourne, Victoria.

On the death of Mary Mosley during 1894 her eldest daughter Clara Travis took the three Mosley girls to England for ten to twelve years. During this time Robert Mosley resided with Mr and Mrs H Robertson who occupied a cottage and factory.

For a short period around the turn of the century the business was known as Mosley Brothers (Brother Jim resided in Western Australia). Soon after the Globe trademark was adopted. In 1889 Mosley advertised his products as having security against Metallic Contamination and as being manufactured through Silver Lined Machinery with glass pumps. The factory was razed by a fire on 25th February in 1907.

Meanwhile Robert Mosley had remarried and was the driving force behind the expansion of the business until his untimely death on 28th of June 1936. The factory was inherited by Jane Francis Victory and was managed by Mr R. A. Reid until his death in 1938. This business was sold during 1970. 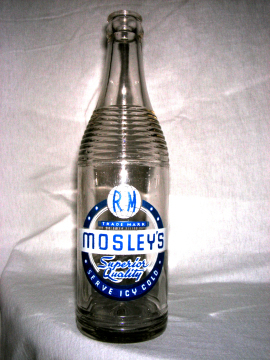